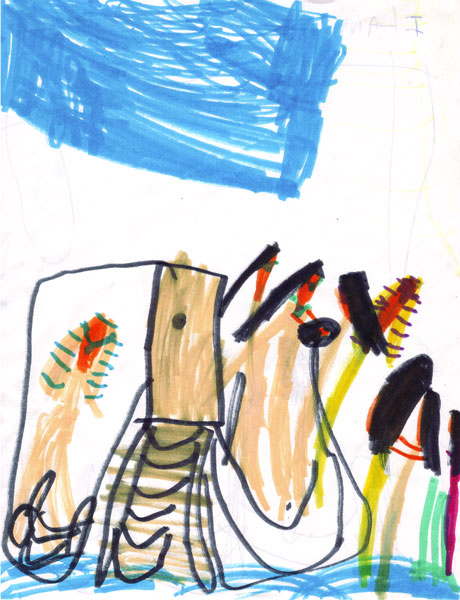 “Shemot is the best parsha in the universe!” declares my daughter. And no wonder…it’s action-packed, with women heroes, defiance of a totalitarian dictator, and the Children of Israel enslaved, but not for long. For her, the best part is how little Moshe is taken from the water by the daughter of Pharaoh. Miriam is standing nearby, and the daughter of Pharaoh’s servants are close by as well. Miriam will soon get her mother, Yocheved, to come nurse her own baby. See my daughter’s rendition of this event by clicking on the thumbnail.

When Moshe is born, Yocheved sees that he is “good”, ‘ki tov’. Aren’t all little babies good? Rashi explains that when he was born, the whole house filled with light. Rashi is referring to a midrash that it was supernatural sign, and therefore she hid him. He is alluding to the light from Breishit, where it also says ‘ki tov’, and it was good.

In his book Exploring Exodus Nahum Sarna points out the language here is not only an echo of Breishit, but later, when Yocheved places Moshe in a basket, it is called a ‘tevah’, echoing the language of parshat Noah.

These two literary allusions tie the book of Shemot (Exodus) back to the book of Breishit (Genesis). Just as God created the World, so He is the one who saves Moshe and will take the Children of Israel out of Egypt.

The container that held the infant Moses was placed among the “reeds”, in Hebrew suf, a term borrowed from the Egyptian for “papyrus/reed thicket.” The idea of the mother was to make sure that the infant would not be carried downstream. It may well be that the rare word suf has been selected in the present text because it is allusive, prefiguring Israel’s deliverance at Yam Suf (Sea of Reeds).

And for your listening pleasure, be sure to check out Ka Ribon by Pharaoh’s Daughter.

3 thoughts on “Shemot: Best Parsha in the Universe!”