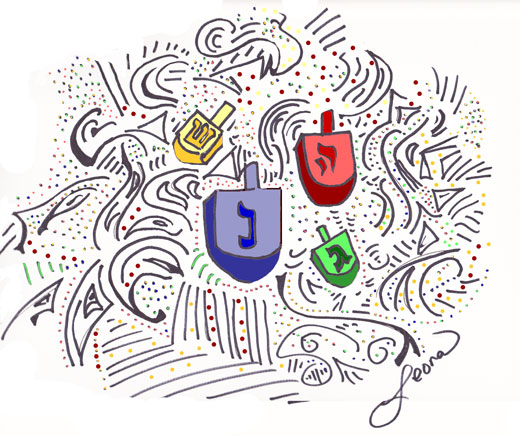 The game of dreidel (yiddish – the Hebrew is sivivon) is associated with Chanukah because when the Assyrian Greeks came to see if the Jews were studying Torah, a practice which was banned, the Jews would take out the spinning top and play that game instead. The four Hebrew letters on the dreidel are Nun, Gimel, Heh and Shin – short for Nes Gadol Hayah Sham (a great miracle happened there). In Israel the dreidel has a Peh instead of the Shin, for Nes Gadol Hayah Po (a great miracle happened here).

I did the above drawing with black marker, then I colored it in with Photoshop. I promised my daughter she could color in the original with colored pencil. If she does, I will post that version as well.