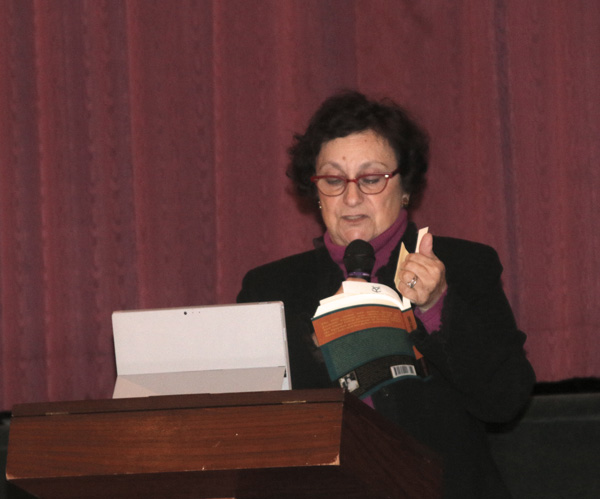 Have you ever heard someone speak, and felt you have become part of history? Last week I had the pleasure of hearing Lucienne Carasso, author of Growing Up Jewish in Alexandria: The Story of a Sephardic Family’s Exodus from Egypt tell us about her book at Congregation Etz Ahaim in Highland Park, New Jersey. After the Tahrir Square protests in Egypt (2011), she decided if everyone was talking about Egypt, it was time to tell her story, too. Others have written about growing Jewish in Egypt (see, for example, review of The Man in the White Sharkskin Suit), but Lucienne Carasso had her own story to tell. Indeed, she uses the book to trace her own family’s history, back to Salonika and even further back to Spain; she hypothesizes some of her family may have come from Catalonia.

A little about Alexandria and its history: Alexandria was founded in 331 BCE by Alexander the Great. He chose the spot on the Mediterranean because it had a natural harbor, fresh water and favorable weather. Many people, not only Jews, came to Alexandria in the later 19th century and early 20th century because of new economic opportunities, especially in cotton (rice and onions are two other major agricultural products of Egypt). Alexandria became a cosmopolitan city, with Greeks, Italians, Jews, Armenians and others.

Life was fun for Lucienne as a child growing up in Alexandria. She was loved by extended family, enjoyed gardens, beaches, pastry shops and the movies. Then one day in November 1956 her father is arrested. This is one year after Gamal Abdel Nasser came to power in Egypt. Her whole world changes. Jewish businesses are taken away by the government, and most Jewish families leave, only with a limited amount of possessions. Her family stays a little longer, as her two grandmothers are still alive, and it takes a while for her father to liquidate what remains of his businesses. She goes from having many playmates to being alone with a few of her adult relatives.

One aspect of the book that I quite enjoyed was about Ladino, a Judeo-Spanish language that was spoken by the Jews of Spain before the expulsion in 1492. Spanish Jews continued to speak Ladino when they moved to cities like Salonika and Istanbul. Indeed, some of my adult friends at Congregation Etz Ahaim spoke Ladino as children. Lucienne’s grandmothers both spoke Ladino to her, reciting Ladino proverbs. Her Nona Sol (maternal grandmother) used to call her “morenica y savrosica” – loosely translated as “dark-haired and flavorful little girl.” Lucienne and her family spoke French at home and learned French at school, but for expressing deep feelings, Ladino was used. In reference to the expulsion of Jews from Spain and the invitation from sultan of the Ottoman Empire for Jews to come, she quotes her father’s expression: “Donde una puerta se cierra, otra se abre” – when one door closes, another one opens.

Her writings on food are sprinkled throughout the book. She loved ice cream and describes enjoying it in restaurants and making it at home. Her family is thrilled to discover in New York you can buy ice cream in the store and store it in your freezer. Sephardic pastries make a showing – women in her family specialize in roscas, ghorayebas and menanas (if anyone knows more about these, feel free to leave a comment). Her family does not keep kosher; the religious members of her family were a few generations back. When she is feeling depressed after her father is arrested and school is stopped for her, she writes about indulging a little too much in rich foods as comfort.

What is freedom? When her family spends time in Italy after being forced to leave Egypt, one of the movies they have the opportunity to see is Exodus. In Egypt one cannot say the word Israel or talk at all about Zionism. The teachers in her school after the rise of Nasser said terrible things about Israelis and Jews. Lucienne speaks of her and her parents’ reaction to an Exodus scene:

“When they sang out loud ‘Hatikva,’ which we used to whisper in Alexandria, my parents and I burst into tears. We were so moved. I knew then we were really free.

Another example of freedom is shown when Lucienne becomes a student in high school in New York City. Her English teacher is giving his interpretation of a novel. A student raises her hand and says she disagrees. Lucienne’s reaction:

“I almost fell over. I could not believe my ears. In the French educational system, one never challenges the teacher. The teacher is the “Authority” with a capital “A.” That day, I learned the meaning of democracy and free speech. A student could be entitled to her opinion as much as the teacher. Wow – what an idea!”

Lucienne Carasso reads from her book at Congregation Etz Ahaim, Highland Park, New Jersey
One of the selections she read from the book at her speech at Congregation Etz Ahaim was her response to the question of her teacher – “Who is the hero of the Egyptian Revolution?” She learns quickly that she should respond Gamal Abdel Nasser. She did not have to believe her teachers, but she had to spit out back whatever they were teaching.

Several members of Congregation Etz Ahaim grew up in Alexandria or Cairo, Egypt. We had two women at our table who had spent their childhoods in Alexandria.

Lucienne enjoyed the movies as a teen, but for her notes on the movies I will recommend you read the book. If you enjoy history and biography or want to learn about other cultures or life under totalitarian societies, Growing Up Jewish in Alexandria: The Story of a Sephardic Family’s Exodus from Egypt is a rewarding read.