Second in my series of interviews with bloggers on writing (see interview with Lorri of Jew Wishes), Shimshonit kindly responded to my questions with revealing and thoughtful answers. Shimshonit lives in Israel and blogs about family life, Israeli politics, books, Jewish topics, food (I think every Jew must blog about food – no?). She used to live in my childhood home town of Newton (she said we met once, but I don’t remember the meeting, which doesn’t mean it didn’t happen – but neither of us were bloggers at the time; blogging didn’t exist yet).

1) When did you realize that you like to write?

I’ve loved writing ever since I learned to write. Even as a child, I used to write letters to friends and relatives. Writing has been almost as big an obsession for me as reading. In high school, when I was learning to write expository essays, I found it incredibly frustrating to have my writing picked apart and critiqued by very hard teachers. But I emerged in the end a much more confident writer, more aware of grammar, of words, of voice.

2) When did you realize that you like to read?

Again, when I first learned to read. I’ve always loved stories, and to be able to read them myself gave me an independence from relying on others to tell them to me. 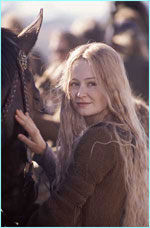 I loved Laura Ingalls Wilder’s stories of her pioneer family. Her family’s courage, self-sufficiency, warmth and love appealed to me. In junior high school I discovered J.R.R. Tolkien, whose love of poetry and epic storytelling fed my love of adventure, languages, and travel, and spoke to my Anglo-Saxon soul. It was Tolkien who, in one of his very few women characters, gave me Éowyn, perhaps my favorite character of all time, whose restlessness and rebellion led to one of the pivotal acts which saved the people of her world from destruction. (Photo at right is Miranda Otto as Éowyn in the Peter Jackson films).

As an adult, I’ve always admired Charles Dickens for his quirky characters and brutal honesty about the good and bad in people. I think Great Expectations may be my favorite novel of all time. My second favorite is probably a tie between George Eliot’s sweeping, intelligent, sensitive Middlemarch and Jane Austen’s quieter, subtler novel Persuasion. For a little humor, I love Pride and Prejudice and anything by P.G. Wodehouse. I could go on forever, but I’ll spare you.

4) Have you ever taken a creative writing course?

I took a year-long college course on the American short story in my early 20s, reading the likes of Fitzgerald, Faulkner, and Gardner, studying their craft carefully, writing my own stories, and working with the rest of the class as a critique group. We continued on our own for three years after that class. It was marvelous. While I don’t write fiction nowadays, that experience has given a distinctive flavor to my nonfiction writing, and has given me much sharper skills as a reader besides.

5) Have you ever studied journalism?

6) Do you find writing or talking an easier way to express yourself, or are both writing and talking similar vehicles of self-expression for you?

I prefer writing to talking. I don’t think at all well on my feet. I like writing for the opportunity to compose and edit my words carefully, and avoid saying anything I don’t mean or might regret later. I also like writing because it allows me to think on paper (or, more accurately these days, on screen). I’ve heard it said that you know what you think about something once you’ve written about it. I share that sentiment.

7) Have you written short stories or poetry (or would you like to do so)?

Yes, but nothing I would care to show anyone now. Disappointment (in employment, in love) make for great poetic inspiration, but very dull reading. And I don’t think I was a very good fiction writer. I write nonfiction when I’m content, and that’s what I’ve been writing for a long time now.

The last lines of Middlemarch, which often make me think of my own life:

Her finely touched spirit had still its fine issues, though they were not widely visible. Her full nature, like that river of which Cyrus broke the strength, spent itself in channels which had no great name on the earth. But the effect of her being on those around her was incalculably diffusive: for the growing good of the world is partly dependent on unhistoric acts; and that things are not so ill with you and me as they might have been, is half owing to the number who lived faithfully a hidden life, and rest in unvisited tombs.

I enjoyed these thought-provoking questions. Thank you!

If you enjoyed this interview, you may also enjoy:

8 thoughts on “Interview with Shimshonit on Writing”