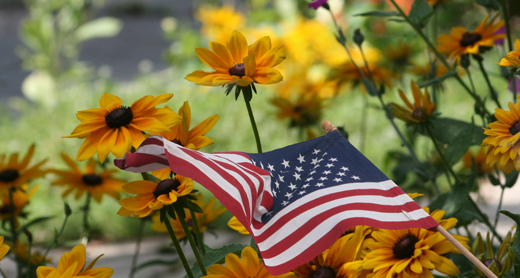 I was in the mood to do something creative this morning, so I took a photo of an American flag (similar to this U.S. flag photograph, both shots were taken at the Asbury Park boardwalk last year) and imposed it over a recent shot that I took of the rudbeckia in my garden. I used a mask in Photoshop to get the background of flowers to appear under the flag. The difficult part is the edges – one carefully has to go around and eliminate all the sky edges from the original photograph.

Here are the two original photos used to create the image above:

The top one of rudbeckia or black eyed susans was taken in my front yard. The bottom one depicts a U.S. flag flying on the Asbury Park boardwalk.

11 thoughts on “Rudbeckia with American Flag”