Description of the book: After Papa loses his job during the Depression, Hannah’s family moves to rural Minnesota, where she is the only Jewish child in her class. When her teacher tries to arrange carpools for a Saturday class picnic, Hannah is upset. Her Jewish family is observant, and she knows she cannot ride on the Sabbath. What will she do? A lovely story of friendship and community. 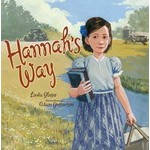 How did you decide how Hannah should appear? her family? the scenery? Did you do research on the period’s clothing and style?

That a good question. Before I even picked up a pencil, I immersed myself in images of people from the 1930s. I looked at as many ancestry web sites as I could and thumbed through books of costumes and period photography. I also dug as far into Orthodox Judaism as I could, just trying to make sure the family in the book didn’t fly in the face of some hidden clause from Leviticus that I didn’t know about.

I looked at lots of sale items on ebay, trying to keep in mind that the era a story takes place in isn’t really the era of the stuff in it, it’s the cut-off date for said stuff. The couches, the lamps, the architecture, all of that has to predate the story. And if someone in the story is dressed in hand-me-downs, well, now we’re looking at fashion from the late ’20s…

As far as the characters themselves, I rely as much as I can on instinct. Granted, I research hairdos and ethnic bone structure and think about people I know or have known that fit a temperament or demographic, but one of the really important aspects of being able to draw the same person, active and emoting for 32 pages, is to really believe that they’re the right person for the job. 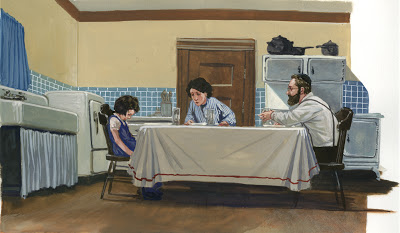 How did you team up with the author, Linda Glaser?

Illustrating books is a sort of funny thing; the whole affair is orchestrated by the publisher, so as it was Joni Sussman at Kar-Ben who contacted me about illustrating the Hannah’s Way.

What inspired you to become an artist?

I’ve always drawn; my mother was an artist when I was growing up, and my brothers and I drew like most other kids would play ball. It was a big part of how we played together. My father, an engineer, used to come home with art supplies he’d picked up for us on his way home from work. I grew up in the only household for miles and miles where a crisis consisted of my mother trying to find out just who took her kneaded eraser.

When I went to college, the toss up for me was between becoming an artist or becoming a musician. So again, I was pretty much the only person I knew who went into art because it was the more practical choice.

I love the illustrations you did of commuters on a train
(see http://adamgustavson.blogspot.com/2012/08/the-summer-in-mostly-mass-transit.html).
What advice would you give someone who wants to improve his/her drawing skills? 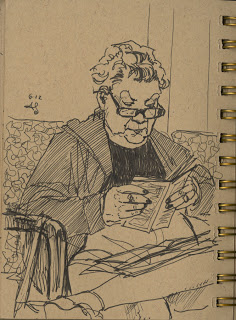 There are two things I’d say; the first and foremost is to draw everything all the time. The way I put it to a student recently was that if what you really want to draw is Spiderman, at some point you’ll have to figure out what kind of furniture Aunt May has in her living room. A big part of making art is experiential, which is to say you don’t really know what something looks like until you try to draw it, and really explore it in your drawing.

Another important aspect is to be influenced by things that aren’t specifically what you want to do. This goes for technique, subject matter, and high falutin’ compositional stuff. A high profile example of this idea at work is in Van Gogh’s love of Japanese woodcuts, and the way that it translated into how he used paint, but it exists to some degree almost everywhere.

What projects are you working on now?

I’ve just finished a really sizable project for Holt’s Christy Ottaviano Books imprint, called “Rock and Roll Highway: The Robbie Robertson Story,” written about the co-founder of the Band by his son, Sebastian Robertson. It involved over thirty oil paintings and real life protagonist that had to age about 30 years in the course of the narrative, which was a bit of a challenge.

You seem like you have worked on many books and illustration projects – which were your favorites?

My two all time favorites have been Leslie Kimmelman’s “Mind Your Manners, Alice Roosevelt!” and Bill Harley’s “Lost and Found,” the latter of which just came out this past fall. From a concept, design and storytelling perspective (the Alice Roosevelt book was very research heavy, to boot), both projects had a lot of freedom involved and called for a really dynamic range of images. Any project that calls specifically for a 1904 Studebaker or leaves room for a stuffed flying badger can’t be all that bad.

Can you tell us a little about the zombie project? How did you get involved in that one?
(see http://adamgustavson.blogspot.com/2012/11/what-do-pete-mitchell-bryan-ballinger.html)

I was invited by illustrator Bryan Ballinger, a friend of Pete Mitchell, a cartoonist and the singer for the band No More Kings, to participate in an anthology of zombie comics, which was an impossible thing to say no to. The idea as I understood it was to have the book available for release at the same time as the band’s latest album.

I batted around several ideas over the course several months before writing up a conversation between two undead companions, one of whom was having an existential crisis.

What is the hardest part of illustrating a book? What part is the most rewarding?

The hardest part is not the “getting started” part, having 32-40 blank pages staring back from a computer layout, though sometimes it seems like it could be.

The hardest part for me is the part I call Page 28 Syndrome: being in the home stretch of something that has been lived with for six to nine months, and putting finishing touches on that scene that every book has that happens right after the conflict is resolved but the story hasn’t ended yet. It feels like 101st mile of a 100 mile run, where instead of running you’re just consciously lifting your knees to get to the end, and trying not to trip. That right there, that’s the hardest part.

The most rewarding part for me was always the moment before a project was shipped off the the publisher, looking at everything spread out on the floor in order.

But truthfully, grade school appearances are really the thing that does it now. The whole process of making books can be so isolating, so much about high minded professional practices done in a cave, that it’s not hard to lose sight of who these things are really for. Wandering around among actual humans ‹ preferably short ones ‹ with a book is really my favorite part.

And I think it’s a reminder of why that page 28 syndrome thing is important to get through. There are plenty of examples out in the world where adults cut corners or cheap out on things for children because they think their target audience won’t notice. And often they’re right. But that doesn’t really matter, does it? Children deserve better things than that, whether they’ll recognize it or not.

The worst thing we can do as people in the creative class is willfully accustom our audiences to mediocrity.

To learn more about Adam Gustavson, you can visit http://adamgustavson.blogspot.com/. About the book Hannah’s Way, see: http://www.karben.com/Hannahs-Way-Paperback_p_502.html

12 thoughts on “Interview with Adam Gustavson, Illustrator of Hannah’s Way”