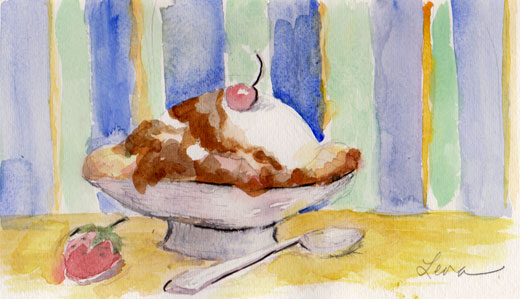 Val Weidmann wrote this poem about five years ago in memory of her father, Murray Abraham Drach, and the poem was published in the Fall 2012 Paterson Literary Review. She shared the poem with me a few weeks ago, and I asked her if I could publish it on my blog (she said yes).

It would be a fitting poem to publish around the time of Rosh Hashana, as that is when we read the passages about the sacrifice of Isaac. You can learn more on the relationship of Rosh Hashana to the Akeida (binding of Isaac) in my post on the poem Oked V’hanekad. When I read the title and first line of Val’s poem, I said to Val, many people have problems with the sacrifice story. Who would sacrifice one’s own son? Since we brought up the topic, here’s one response by Rabbi Louis Jacobs. Personally, I like the response that the Akeida is an admonition against child sacrifice.

What image to post with Val’s poem? I did not choose a dark, chiaroscuro Renaissance or Baroque painting of sacrifice. Instead, I chose a cheery ice cream painting I did several years back that I posted near the holiday Shavuot when it is customary to have dairy. Later in the poem, you will find the ice cream reference. Nothing to do with Shavuot.

Finally, tonsillectomy facts: In the United States, the number of tonsillectomies has actually declined significantly and progressively since the 1970s.

Enough of the commentary: here is the poem.

The Sacrifice of Abraham by Valeri Drach Weidmann

My father never liked this particular Bible story.
It came early in the book,
Not long after the covenant, a tricky clause.
Abraham had already sacrificed so much.
but he had gained everything – the son.
My father couldn’t imagine a father marching a child up a hill.
A questioning child,
“Where’s the sacrifice dad?”
There was no calf or lamb in sight,
only a father brandishing a knife.
I am reminded of another story, when my parents took me to the hospital.
I too had many questions traveling up the hills of the Bronx in a taxi.
Where are we going?
We’re going to see Uncle Sid the butcher.
My mother didn’t want to alarm me.
In the 1950’s you didn’t tell a kid much.
So there we were in the hospital, the sharp
smell of ammonia, a knife to the nose.
Uncle Sid was no where to be found.
And it was me they were strapping down,
There was no T-bone or lamb chop in sight.
The mask that pumped sweet, smothering ether,
The missing tonsils,
The toys, the ice cream,
The five days in the hospital.
I personally didn’t see any blood.
Not my own or anyone else’s.
My father was so relieved the surgery went well,
he filled the hospital room with gifts
And went out to get one more,
A phonograph in a hat box,
With a needle, with a burning metal smell,
whenever it touched the vinyl record.
My Father and the shop owner argued and fought.
They fell through a plate glass window.
He and the owner miraculously sailed
through a shower of shards unharmed,
Another sacrifice averted.
A father’s love once again rewarded.
My father’s middle name was Abraham,
But he never would have sacrificed me.

I will leave you with one question: what do the Biblical story of the sacrifice and Val’s experience of tonsil surgery have in common?

16 thoughts on “Poem: The Sacrifice of Abraham by Valeri Drach Weidmann”