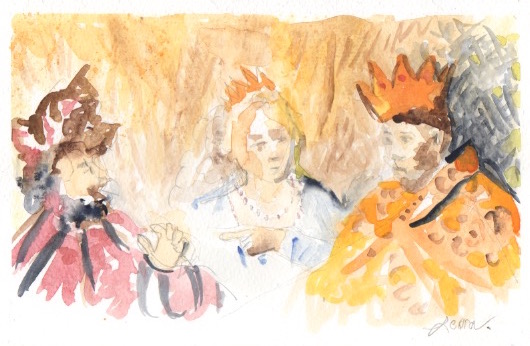 I started this sketch of Esther pointing out Haman to Ahashverosh of Persia way back in December. It is based on an old painting – if you want, you can look it up. I liked the idea of the boldness of Esther. Is she someone to emulate? Can we find evil and point it out? Even if it means risking out lives?

The story of Esther is told at the Jewish holiday of Purim, which usually falls in the early spring. So you would think December would be enough time to finish a sketch? Mind you, this isn’t a full-scale oil painting, although I think portraiture (especially three people) is much easier in the medium. Well, December rolled in January and February, when I went with my daughter to Israel. Then I got offered some great website work when I returned … I am still working quite a few hours a week for a school at Rutgers University. Fast forward … daughter went to camp, husband took son to college orientation in Maryland. I’m home alone … what do I pull out, but this painting! Started it again. The first time Haman turned out like a blob of black. I intended to give him a three-cornered hat instead of the Dutch feathered cap in the painting I used as a model. Maybe next time.

I will now spend a bit of time poking around for inspiration for a new watercolor sketch. Suggestions welcome.