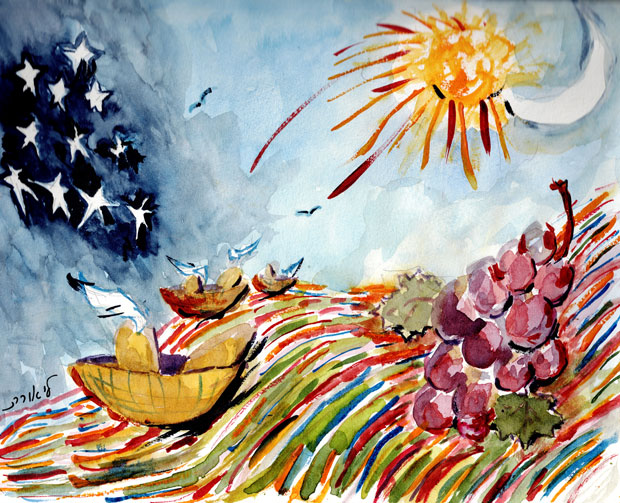 I succeeded in making illustrations for each of the parshiot (section of Torah read in the synagogue each week) of Breishit (Genesis) this past fall. However, only a few illustrations became blog posts.

I had a great time redoing an illustration for Parshat Vayeshev, the parsha that has Joseph’s dreams along with the dreams of the butler/cupbearer and of the baker.

“I have had another dream: And this time, the sun, the moon, and eleven stars were bowing down to me.” — Genesis 37:9

On the vine were three branches. It had barely budded, when out came its blossoms and its clusters ripened into grapes. — Genesis 40:10

In the uppermost basket were all kinds of food for Pharaoh that a baker prepares; and the birds were eating it out of the basket above my head.” — Genesis 40:17

The stripes of Joseph’s coat, not part of a dream but part of the parsha, felt like I was painting a roller coaster.

Jacob’s Ladder, a work on paper done in gouache, is one of my favorites. In creating the painting Jacob’s Ladder, story found in Parshat Vayeitze, I looked at Renaissance and more recent paintings for inspiration. The man lying down was actually inspired by a relative napping on a couch. He made a convenient model for the painting.

He had a dream; a stairway was set on the ground and its top reached to the sky, and angels of God were going up and down on it. — Genesis 28:12-13 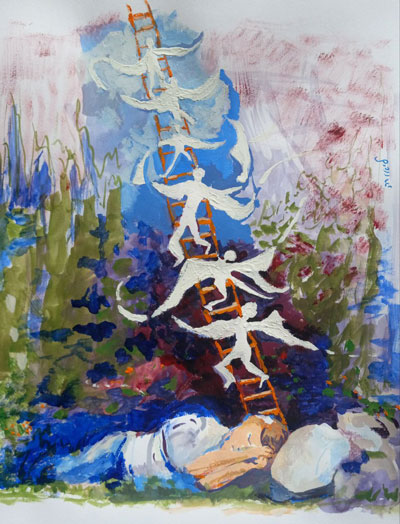 I set up a store so I can sell reproductions of my art work. There are two options: for those who want fine art productions they can hang proudly in their homes, I am offering prints of painting such as Jacob’s Ladder and Joseph’s Dreams for limited times with limited prints. One will need to contact me directly to get a fine print. For those who like mugs or tote bags with Highland Park illustrations, visit the online shop (click on any image to get to more products). Buy as many of those as you want!