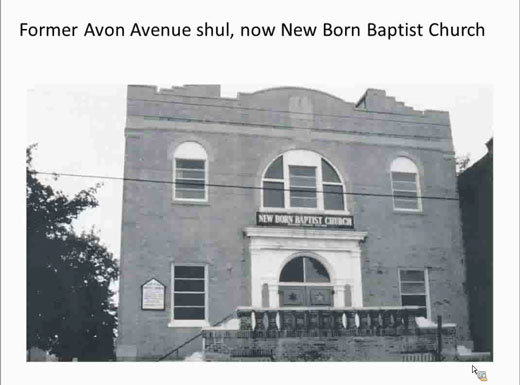 Last week Rutgers Bildner Center for the Study of Jewish Life and the Bloustein School of Planning and Public Policy hosted a talk by Professor Kenneth T. Jackson on Newark’s Decline and Resurgence in the 20th Century. The talk was available via webcast to those watching from a distance. I managed to listen to much of the talk. My apologies to Prof. Jackson for any remarks I may have misinterpreted.

Professor Jackson spoke on the history of Newark, New Jersey and gave possible ideas for reviving the city in the near future. Newark is the largest city in New Jersey. Back in 1890-1900, said Professor Jackson, Newark leaders decided not to annex various neighboring areas when they had the opportunity. This meant that there is little room for larger single family homes in the city, and so when people wanted to own a house, they had to leave the city. The riots in the 1960’s signaled an end to the city’s prosperity, as people who would previously visit, for example, department stores in the downtown stopped doing so. Much of the city’s decline, he suggested, was due to choices of the leaders; he gave the example of Atlanta as a city that worked with African American leaders to keep the city safer and more economically stable. A similar city in decline would be Detroit. Professor Jackson didn’t have much good to say about Lewis Danzig, a city planner for Newark in the mid-twentieth century. Currently, the State of New Jersey pays for much of the Newark public school system, as the city itself can not afford to do so. He feels Cory Booker, the current mayor, is working hard for the city, and he hopes he will succeed.

Another failure in Newark history was poor land use control. Newark was home to various industries such as tanning, brewing and leather goods. Newark allowed factories to be located near neighborhoods. Agent Orange was manufactured in Newark.

Professor Jackson did not devote much time to Newark’s Jewish history, although he did share the slide of the shul that was converted into a church on the top of this post (see another New Jersey shul that is now a church). In the earlier half of the twentieth century, Newark had a vibrant Jewish community. My husband, who grew up by the Jersey shore, remembers old-timers talking about “Shabbos in Newark.”

At the end of the lecture on Newark and declining cities, Professor Jackson shared a few points about how Newark might be revitalized:

One of his favorite suggestions for the revival of a city is sidewalk cafes – people get outside together in public in a social manner. He had many examples of cities that have declined and cities that have been revitalized – one he mentioned that experienced revitalization after a long, long period was Athens.

Are there declining cities where you live? Are there cities that experienced decline but now enjoy some revitalization? Finally, if you live in a part of the world far from New Jersey, have you ever heard of Newark?

12 thoughts on “Notes on Newark and Declining Cities”