You plan, you plan and God laughs. I had certain ideas about how to focus this blog once I renamed it Sketching Out, but my mind is not there. So I apologize for the potpourri of this post.

I have some photos that are supposed to go with a post called Fermenting Daikons. What is a daikon? It is a strong and long white radish. I bought one for a dollar at the organic stand at the Highland Park Farmer’s Market. Here is one photo: 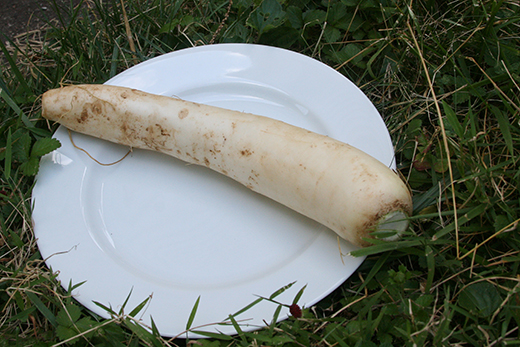 Last night we walked down Raritan Avenue (was it hundreds? or thousands? Probably close to one thousand) in support of Israel. It was a peaceful march. Lots of smiles, some hugging, parents of IDF soldiers (yes, we have quite a few in this community) glad to receive support. In the short rally at the end, one of the topics mentioned was the appreciation that the U.S. Congress has given funding for the Iron Dome, and how local groups such as NORPAC have played an important role in meeting with senators and congressman to get funding for the Iron Dome.

The sign reads (in Hebrew, loosely translated by me) “Soldiers of the IDF, we hug you from a distance!”

Thank you to the owners of the old Y property who allowed us to use the space for a few speeches, including a moving one about a soldier (a family member of the speaker) who had just been killed while on duty.

You can watch a video of walkers down Raritan Avenue in support of Israel in this nine minute video by Gary Leslie.

When I posted some photos on Facebook, I had a few people in Israel thank me. But all I did was post a few pictures … I don’t have to go and dodge missiles every time a siren goes off. My friends and family in Beit Shemesh have been going to the shelter perhaps five times a day? But that is nothing compared to those who live in the south of Israel. People who are handicapped just have to stay in the shelter. Or pray the missile won’t hit them.

“What can I do?” seems to be on the mind of many. Here is a guest post on my friend’s A Mother in Israel blog with 21 Ways to Help Israel. Personally, I decided to give to the Lone Soldier organization because I know too many lone soldiers (a Lone Soldier is someone who serves in the IDF and whose immediate family does not live in Israel). And then because one of my friends in Israel recommended it, I also sent a donation to A Package From Home.

Excerpt from a note by a friend in Beit Shemesh (who grew up in Edison, NJ): “The situation here is very tense. Everyone knows someone who is down in Gaza fighting for us. Everyone has experienced a Tzeva Adom (Red Alert) at least once in the past few weeks. Everyone is on edge about possible kidnaps, airstrikes, and the war. Despite all this, life goes on here. People still go to work and sit in the same boring meetings, kids still go to the parks, people still go shopping, and see movies. Life must continue here or the Terrorists win.”